Join us for the next adventure to Mongolia. For more information, please visit: https://kahwailin.com/mongolia-2023a/ 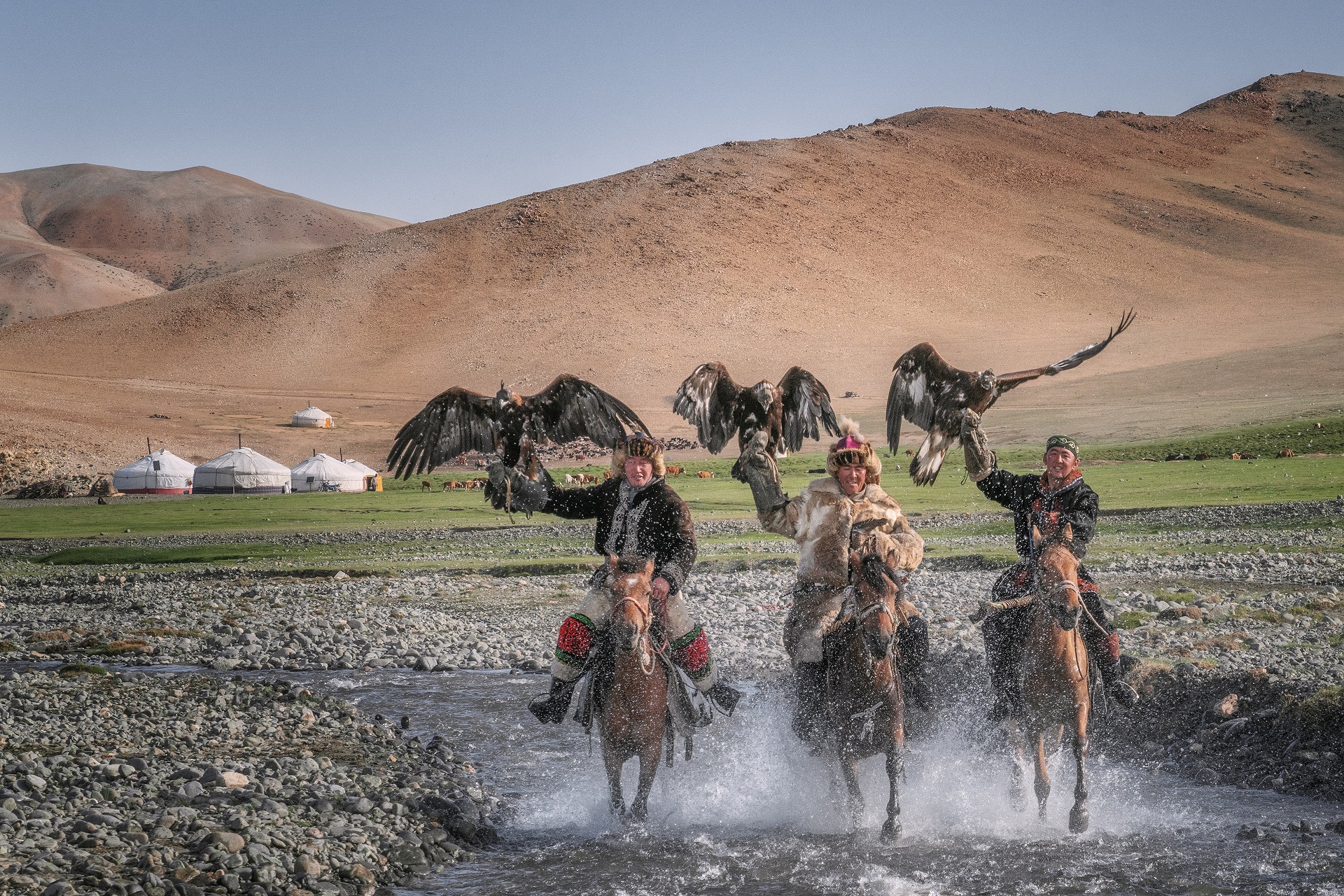 As a photographer who spent 6 months traveling each year, the expedition to Mongolia wasn’t just another tedious business trip but unique in its own way – their unique cultures in the unspoiled land that have been known as the “end of the earth”. Indeed, Mongolia is the most sparsely populated country in the world, there are only 2 people per square km (6 per square mile). In contrast, Macau has the density of almost 22,000 people per square km (58,000 per square mile)! Mongolia is also the second largest landlocked country (after Kazakhstan), with the closest ocean being the Pacific’s Yellow Sea, which is 700km (435 miles) to the east! 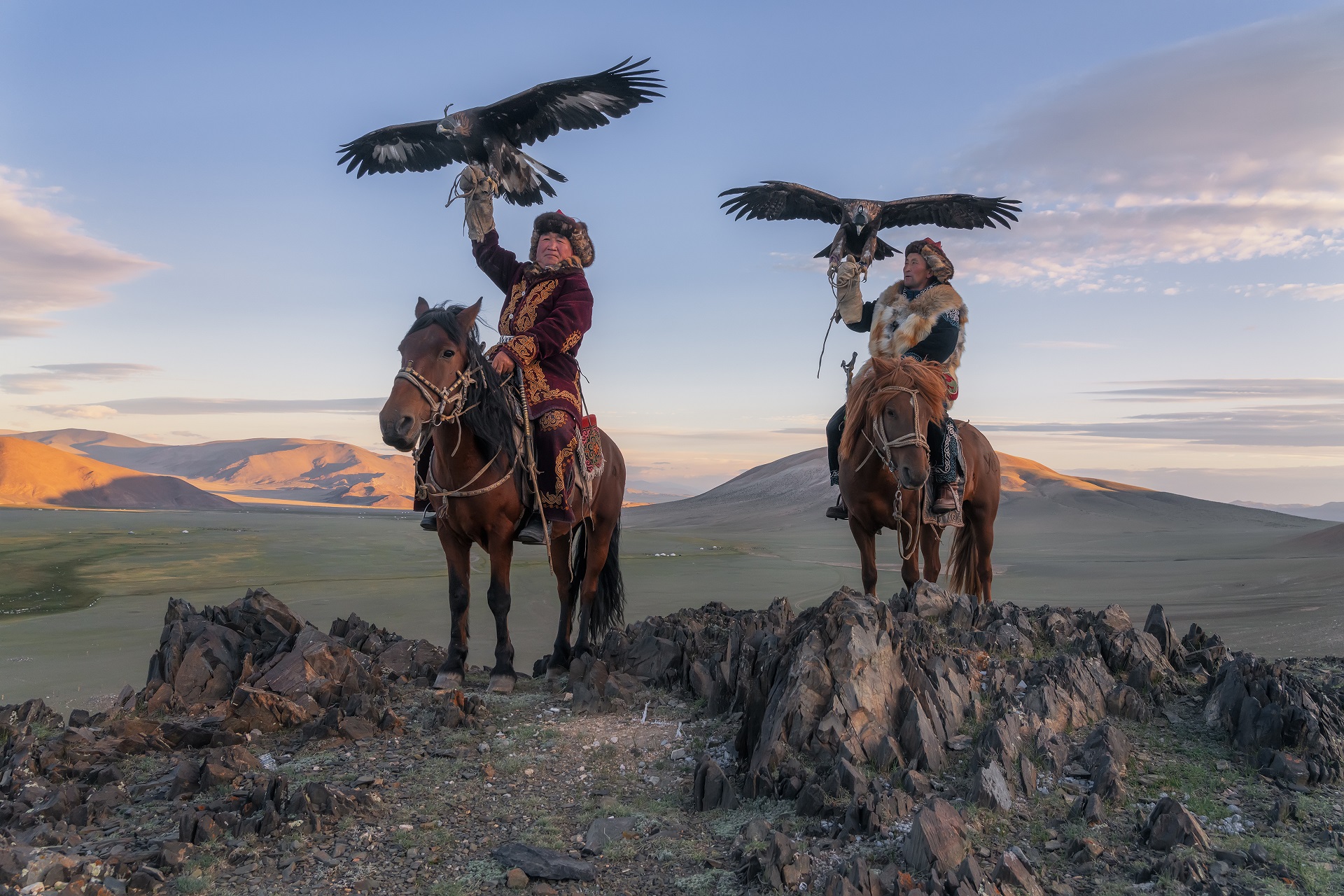 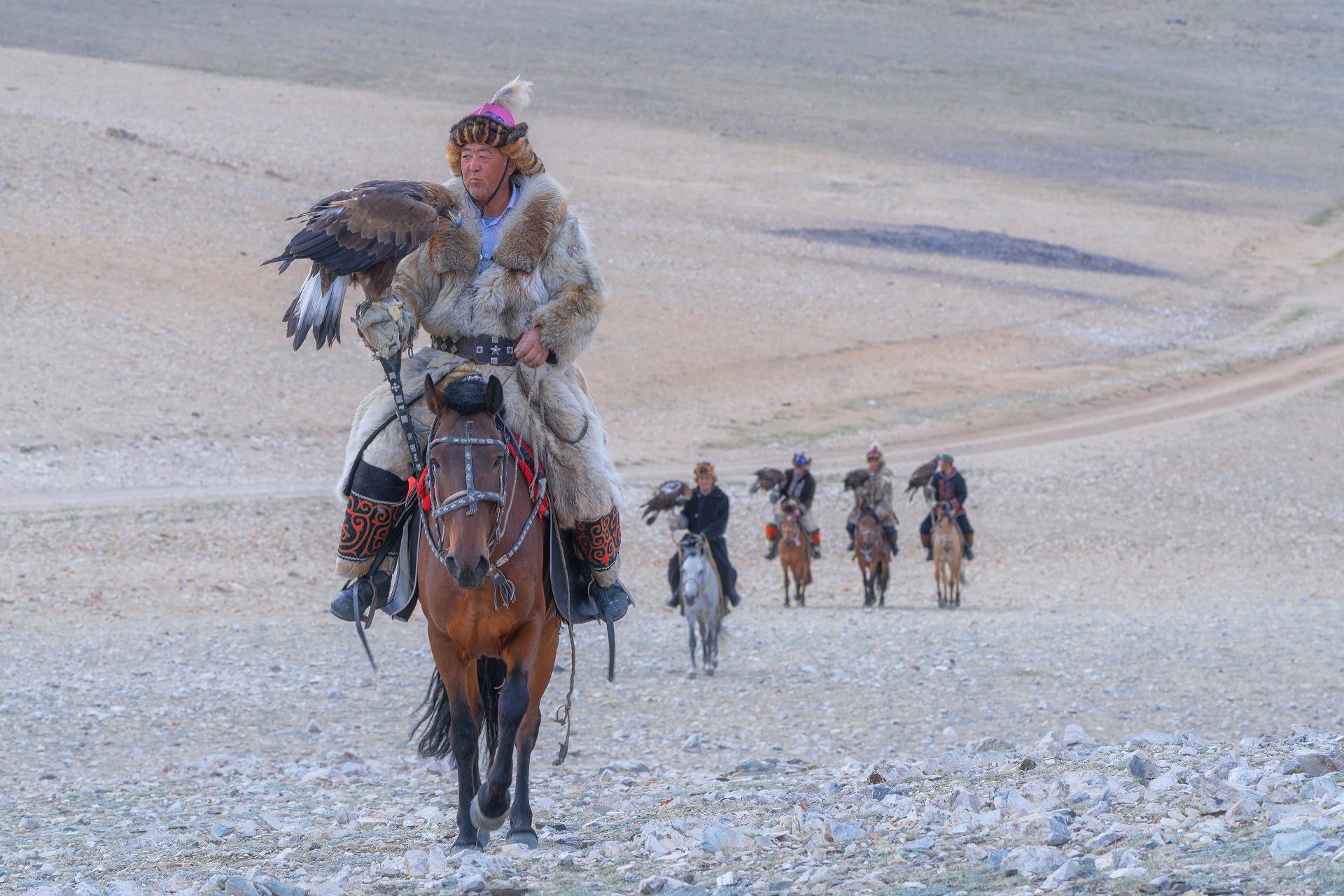 I visited the Bayan-Olgii in Western Mongolia in June 2022 (scouting trip) and August 2022 (photo workshop). We stayed in the traditional Kazakh Ger camps. Our host, Mr. Shaimurat Askhabil, a 58 years old Kazakh eagle hunter, is a herder living in a nomadic lifestyle in Altantsugts district, Bayan-Ulgii province in Western Mongolia. Shaimurat has about 100 sheep, 100 goats, 30 horses and 6 cows. According to Shaimurat, a sheep or a goat can sell for about US$100 and a cow can sell for about US$400. He uses the horses for herding, milk and meat. 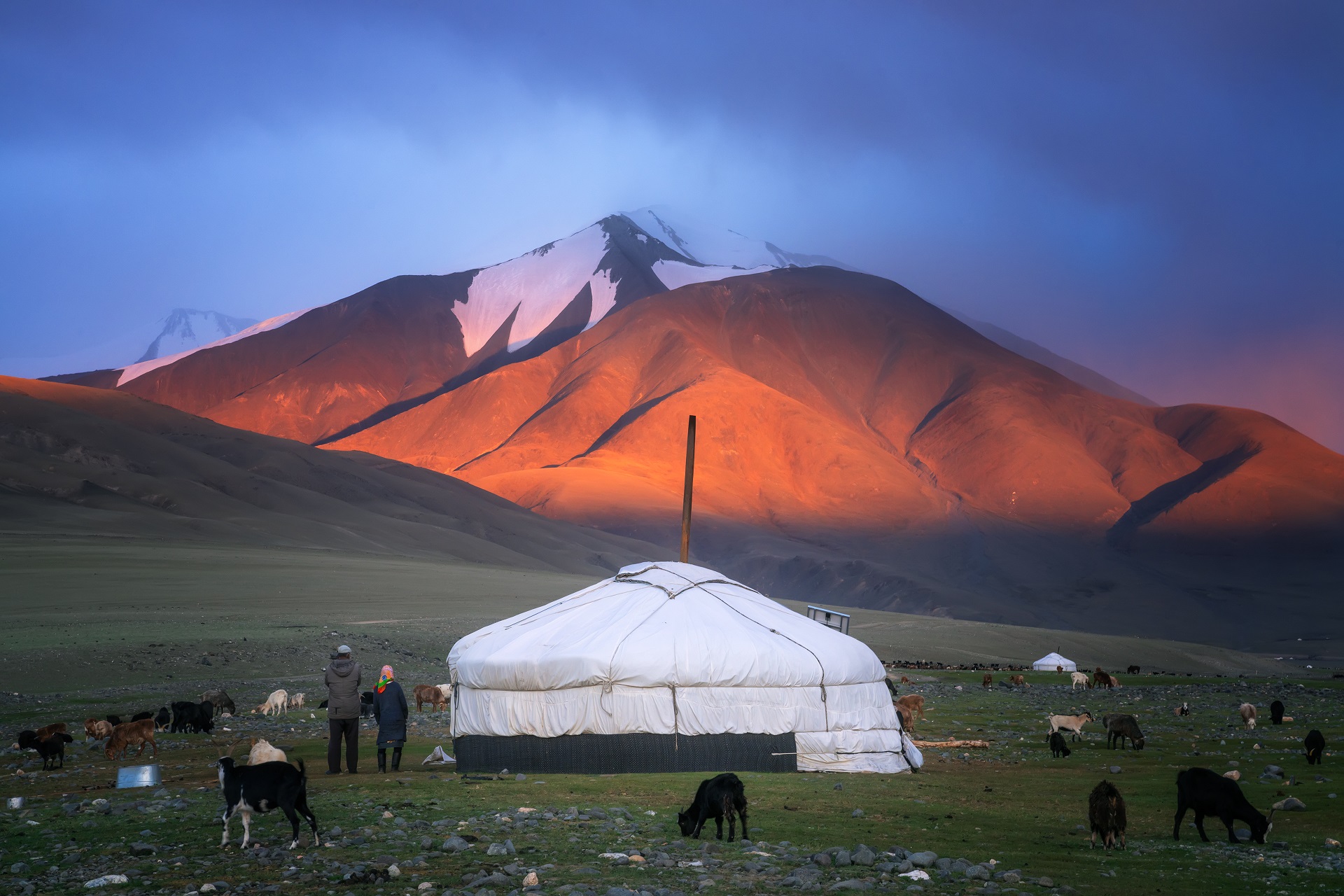 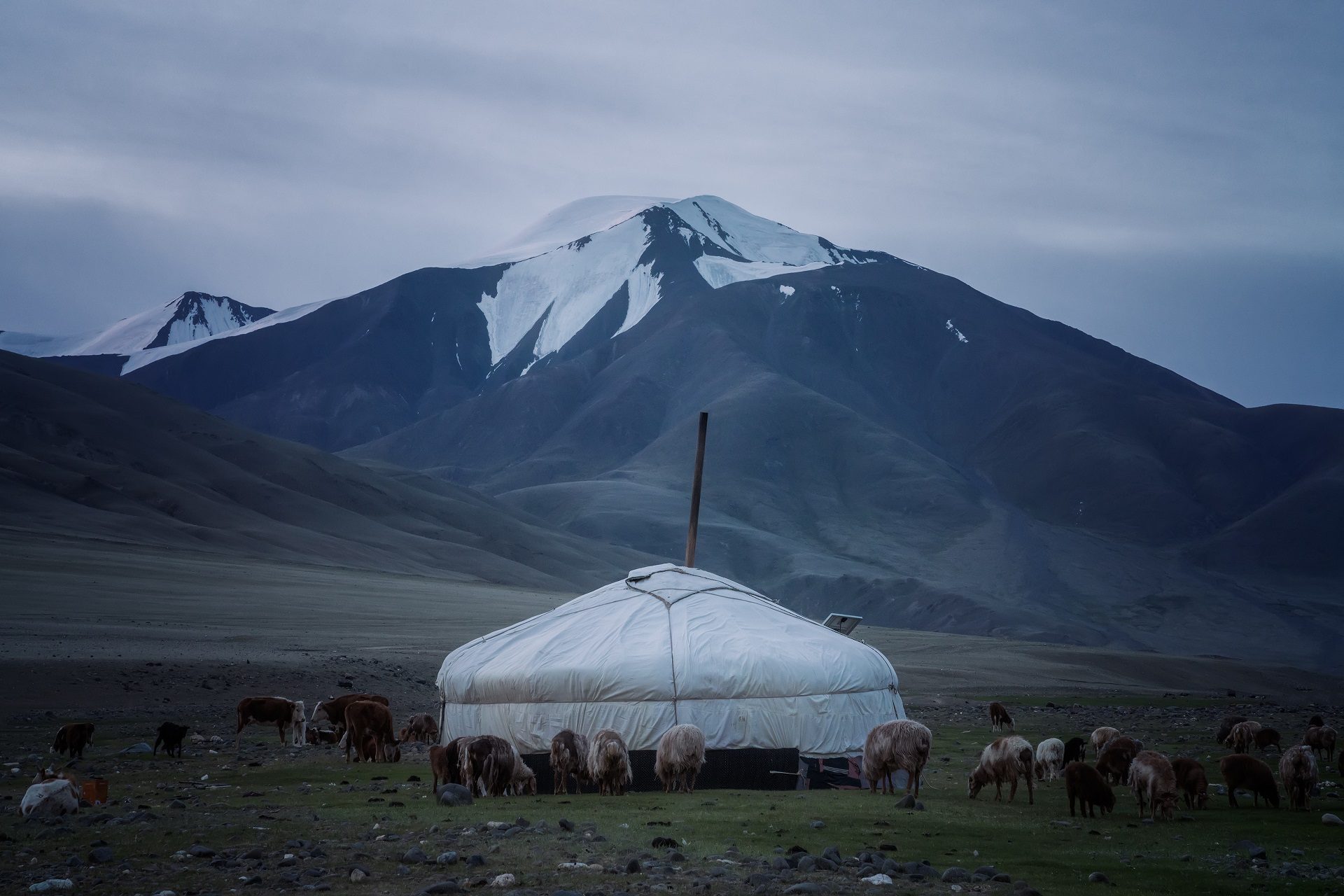 From Shaimurat’s Ger camps, you don’t have to pay extra for the mountain view, the majestic Tsambagarav Mountain is just to the East. Tsambagarav mountain is a mountain of the Altai Mountains range, it has two peaks, “Tsast Uul” (the background mountain in the upper left image) is the highest peak of 4,193m (13,757 ft) and another peak with the same name “Tsambagarav”. Tsast Uul is also the second highest peak in Mongolia. 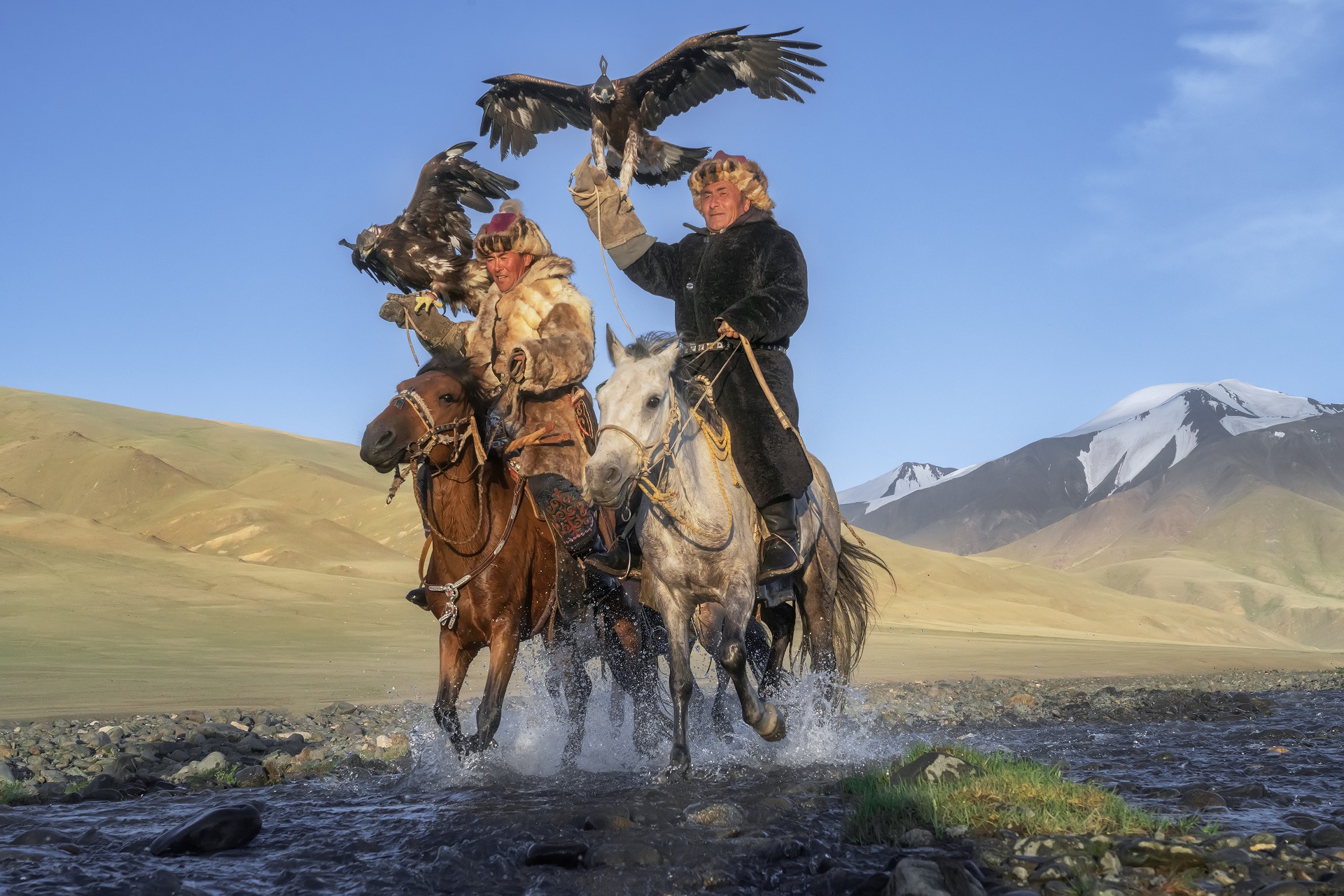 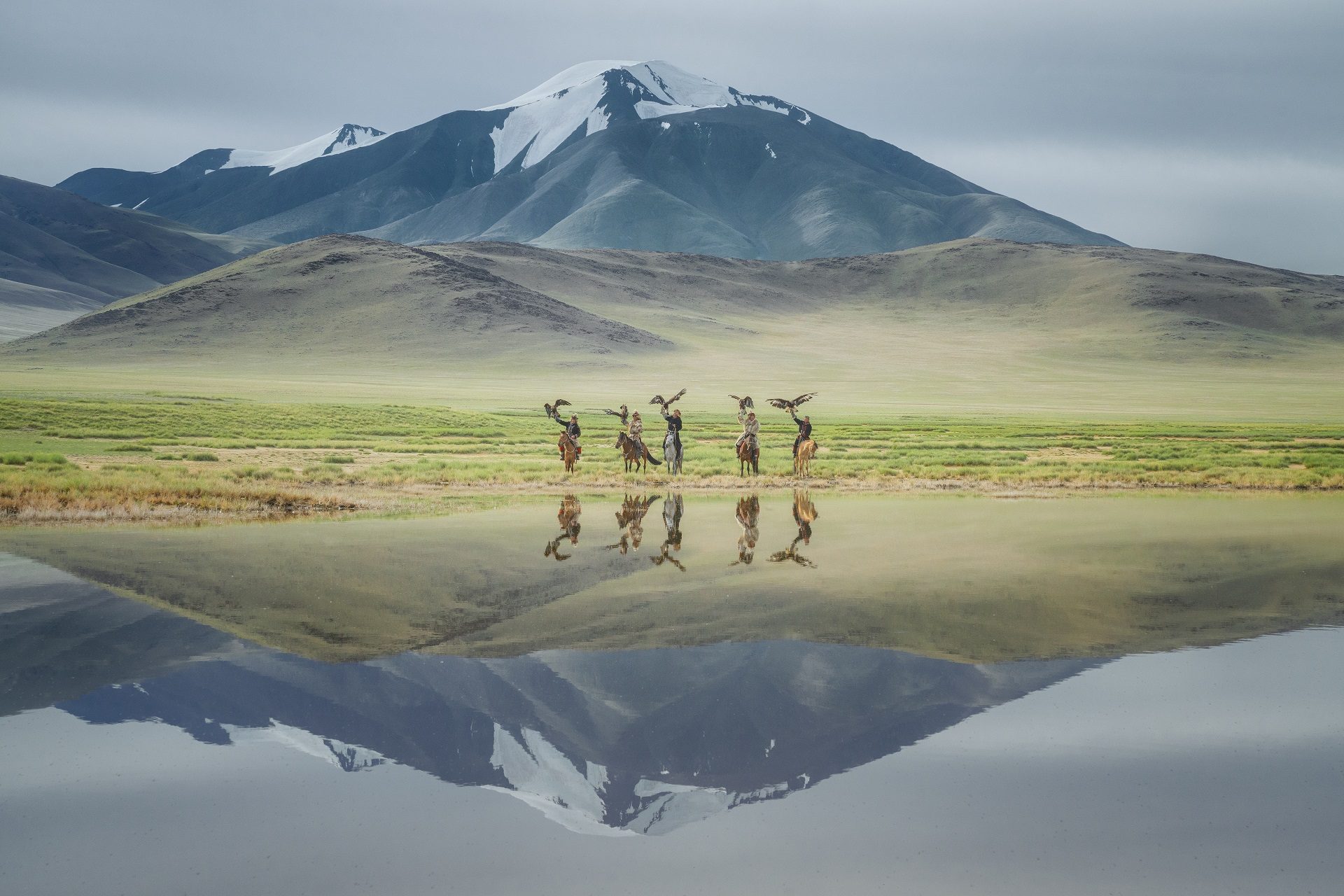 Kazakhs are semi-nomadic people live around Altai Mountains in the Bayan-Ölgii in Mongolia since 19th century. Bayan-Olgii means “Rich Cradle” in Mongolian. It is the westernmost provinces of Mongolia, and it is the country’s only Muslim and Kazakh-majority province. There are about 87,000 Kazakhs in Mongolia, which represent about 4% of Mongolian population. The Mongolian Kazakh are culturally and ethnically different from the rest of Mongolians, in both language and religion. They are Sunni Muslims, where Islam was brought to Kazakh since 8th century. The Kazakh language belongs to Turkic family of languages, and is the major language in Bayan-Ölgii. Up till 1930, the Kazakhs can move freely in between Kazakhstan, Mongolia and the province of Xinjiang, China. After the founding of Mongolian People’s Republic in 1924, many Mongolian Kazakh began settling down in the Western Mongolian highlands. 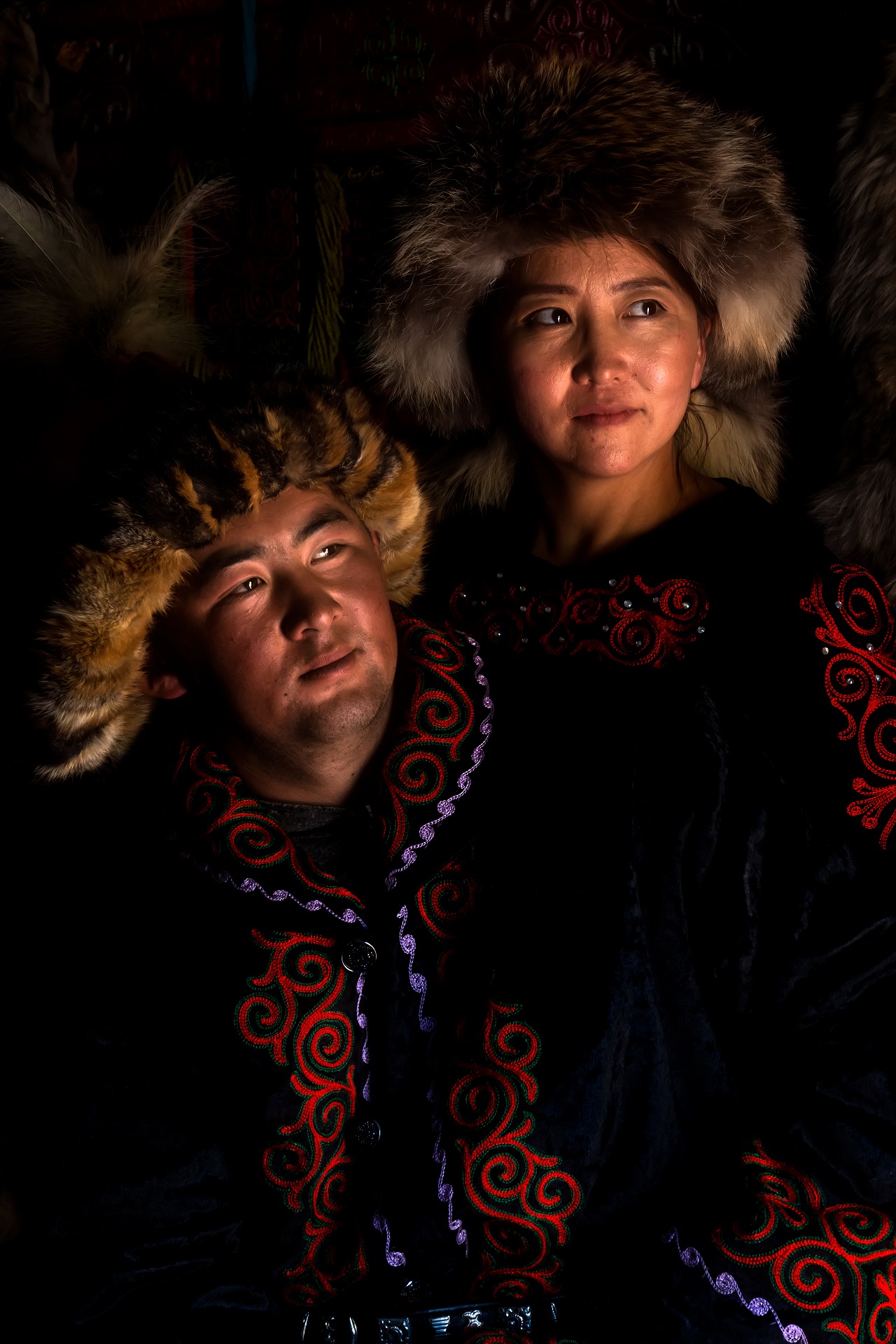 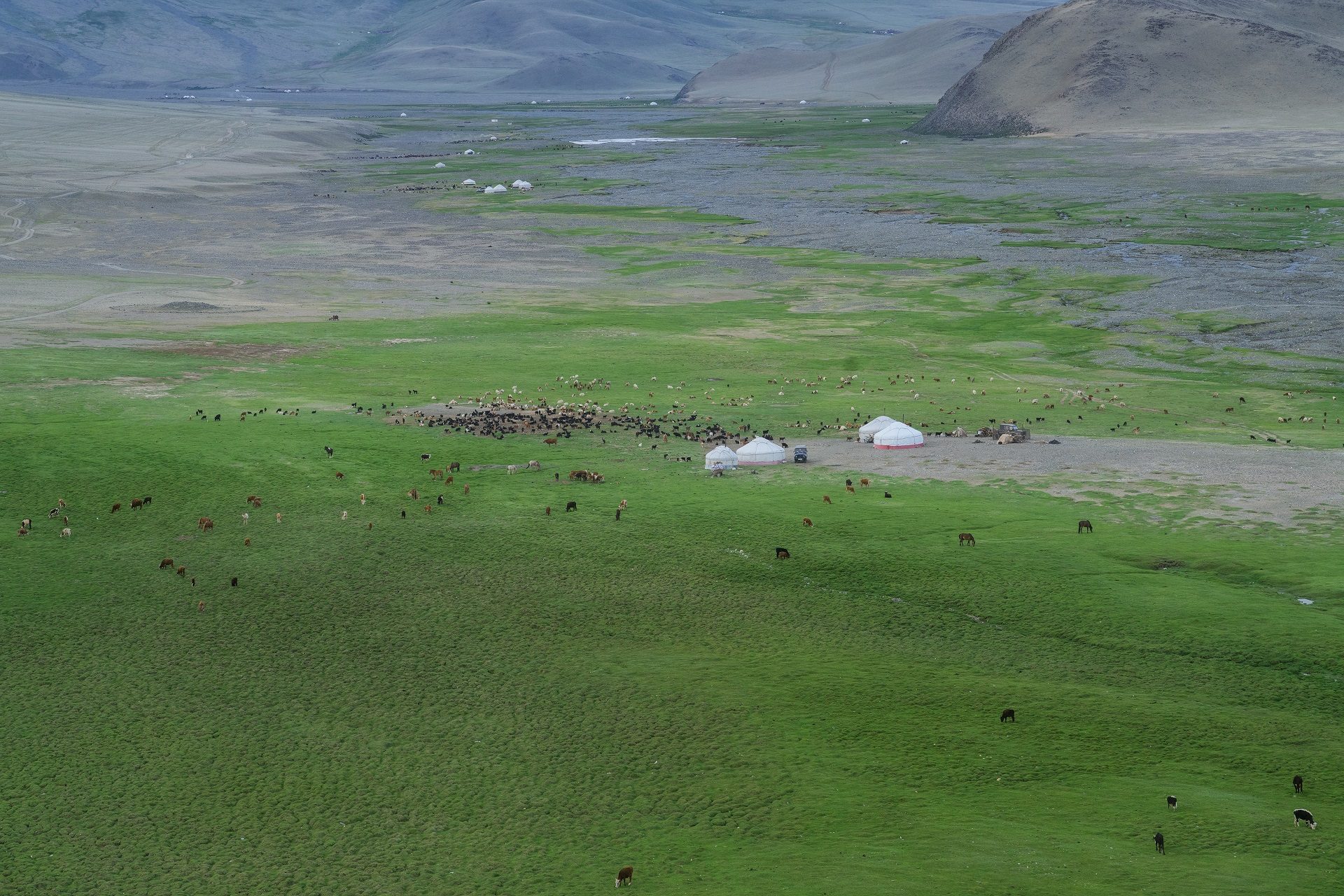 In winter, they live in small wooden and mud houses. Winter in Mongolia is long and harsh, with temperatures ranging from -20°C to -45°C! In summer, they live in traditional Gers or yurts which are portable round tents. They move several times a year with their herds, and they are dependent on their domestic animals for livelihood. According to Shaimurat, they can setup or take down the Ger camp in about an hour with the effort of 4 to 5 people! The wooden frame can last for 20-30 years, while the outer cover has to be changed every 2 years. 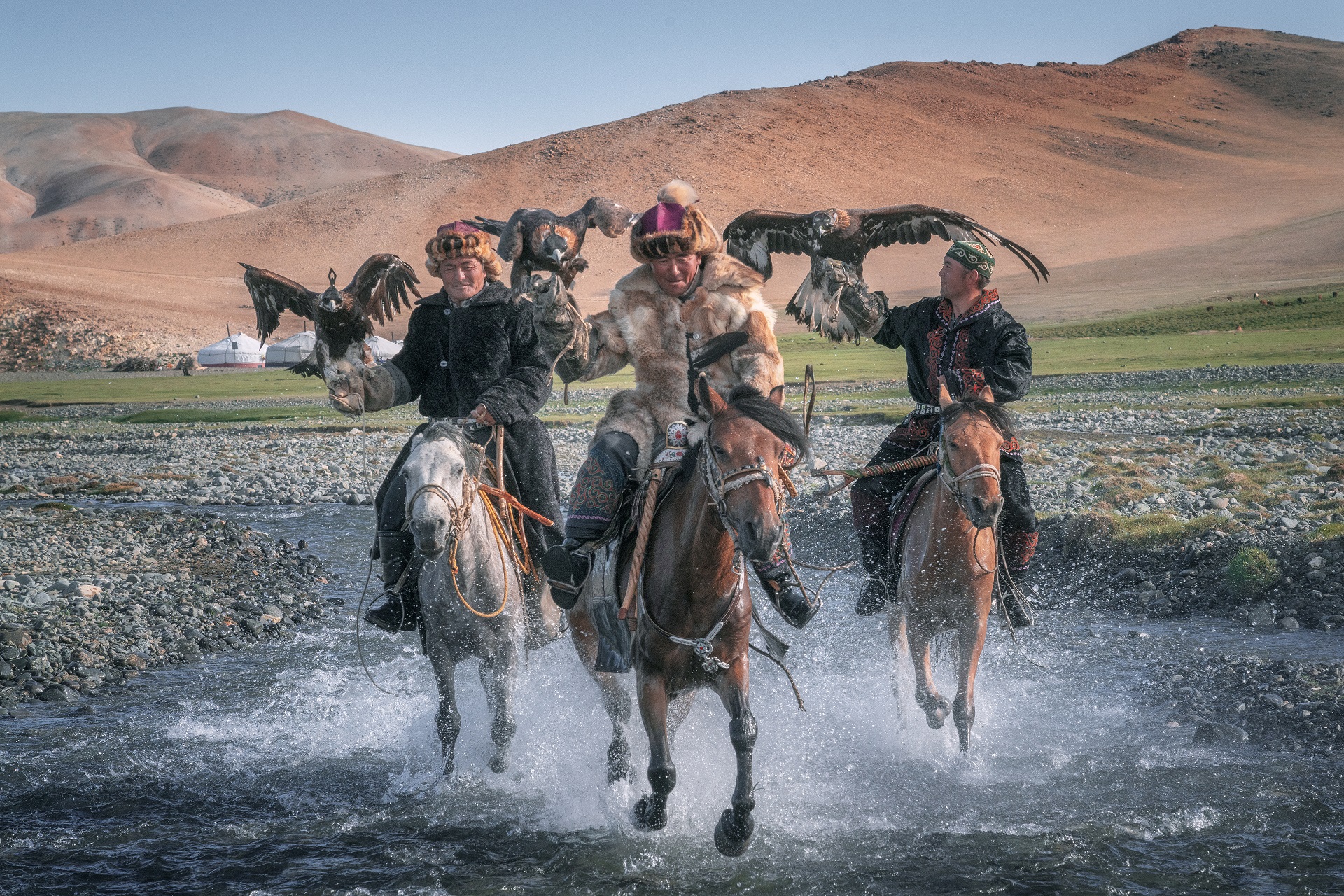 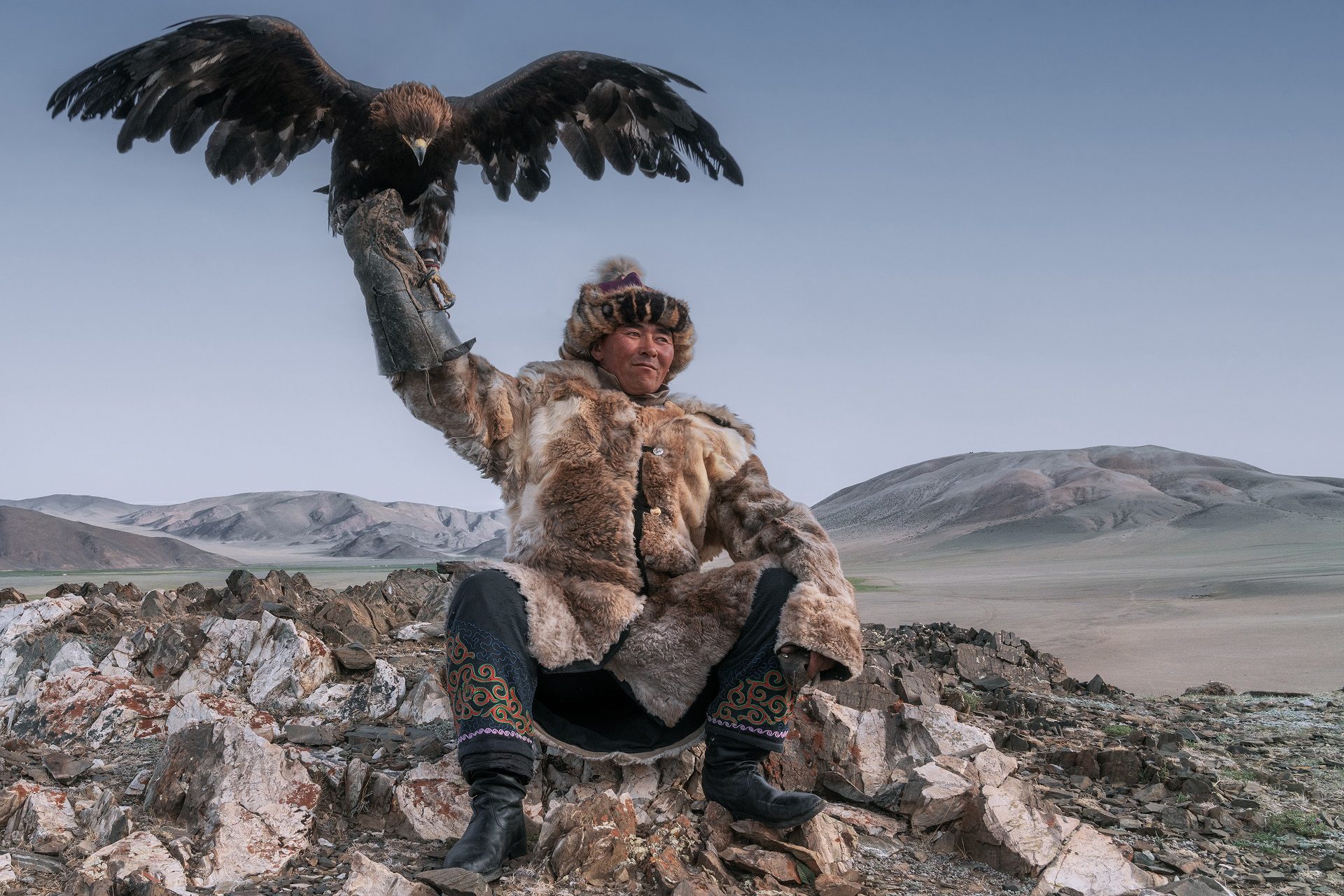 Today, there are an estimated of 250 Kazakh eagle hunters in Mongolia. The tradition of eagle hunting is over a thousand years old, as depicted by the cave paintings from Bronze Age. It was inherited from their Turkic and Mongol ancestors and were practicing it when they emerged as an ethnic group since 15th century. Genghis Khan was believed to be an eagle hunter! 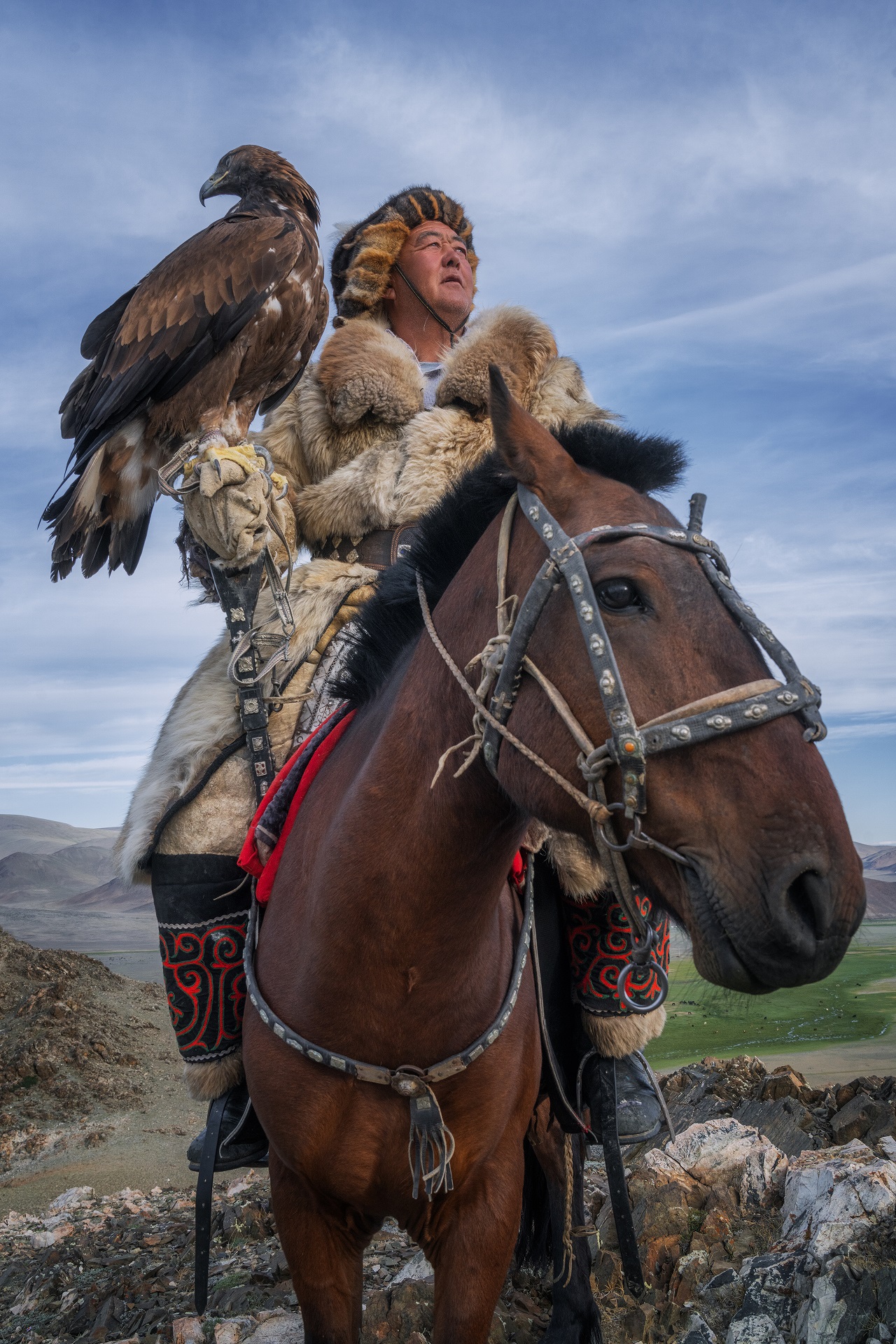 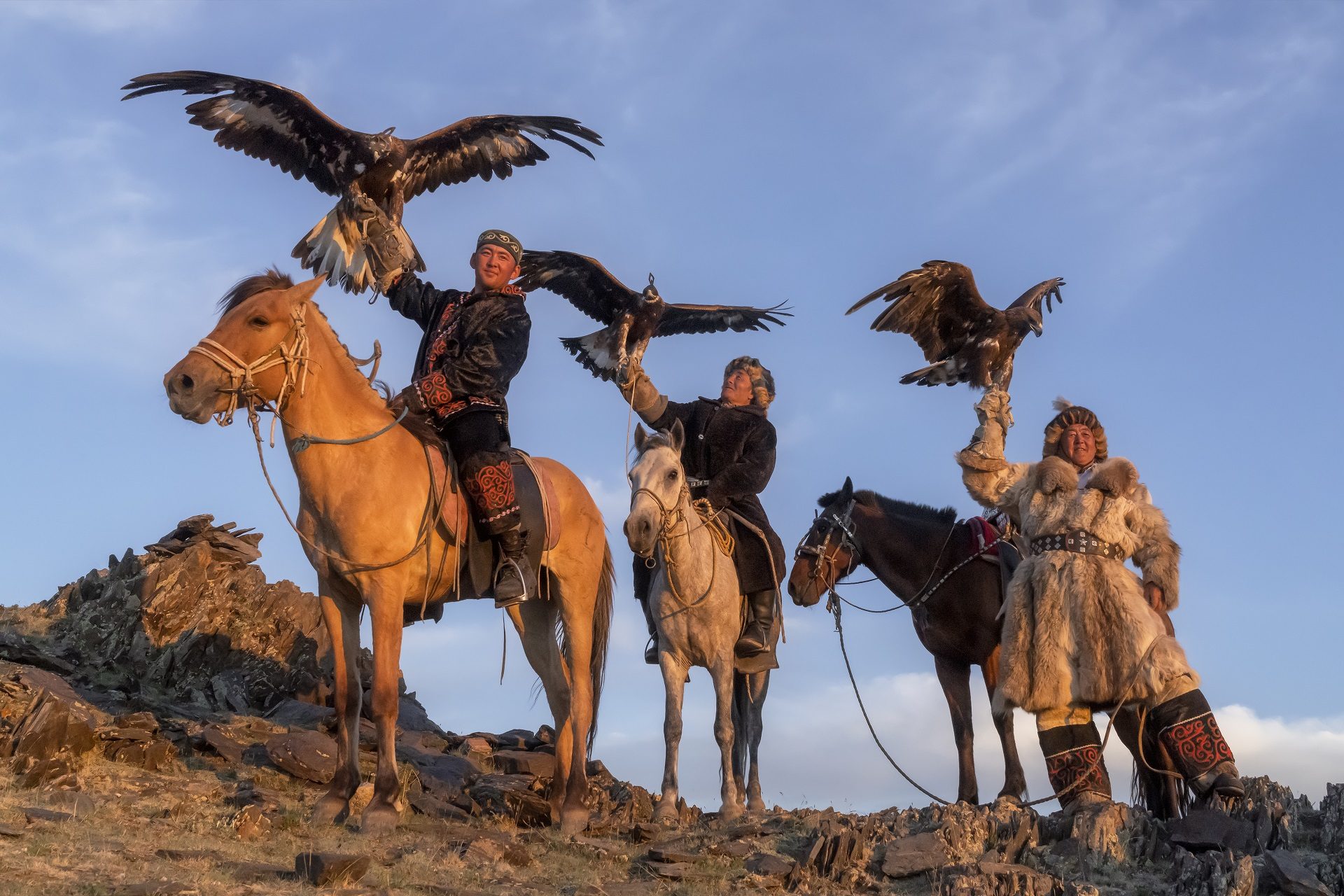 The skill of training golden eagles is passed on through generations, from father to son at a young age and this considered a great pride. Shaimurat has been practicing hunting with eagle for 21 years, and the skills were taught by his father. In recent years, many younger generations move to city for better education, healthcare, and job opportunity. For those who still lives in traditional lifestyle, the practices of eagle hunting provide an additional income from tourism. Shaimurat has 6 children: 2 sons and 4 daughters. 2 of them are working in Ulanbaater, 2 of them are working in Bayan-Ulgii, and 2 of them are herders. As for Shaimurat, he enjoyed living in the countryside, training his eagles, riding his horses, and enjoying his favorite horse’s milk, the lifestyle that bring the feeling of freedom. 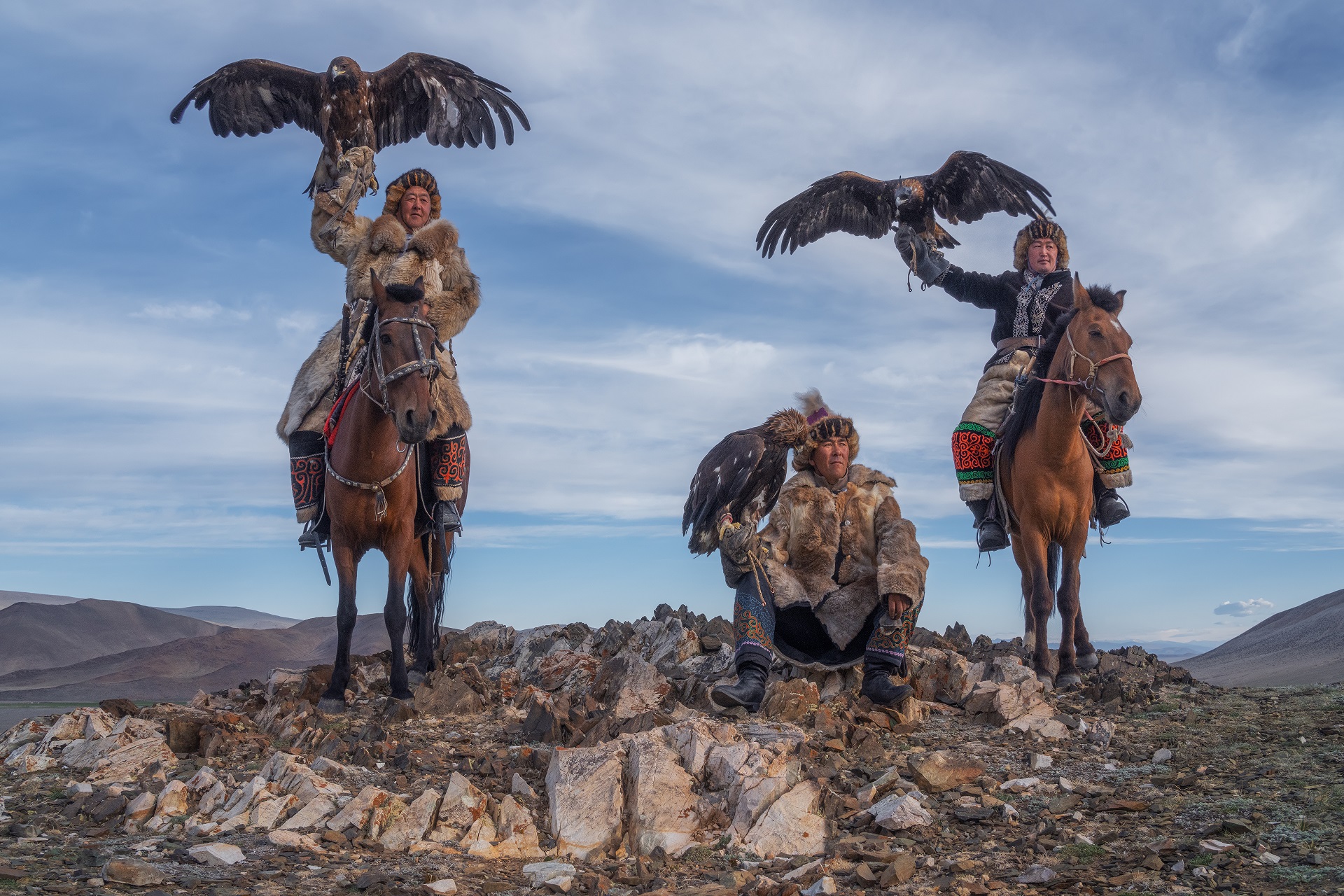 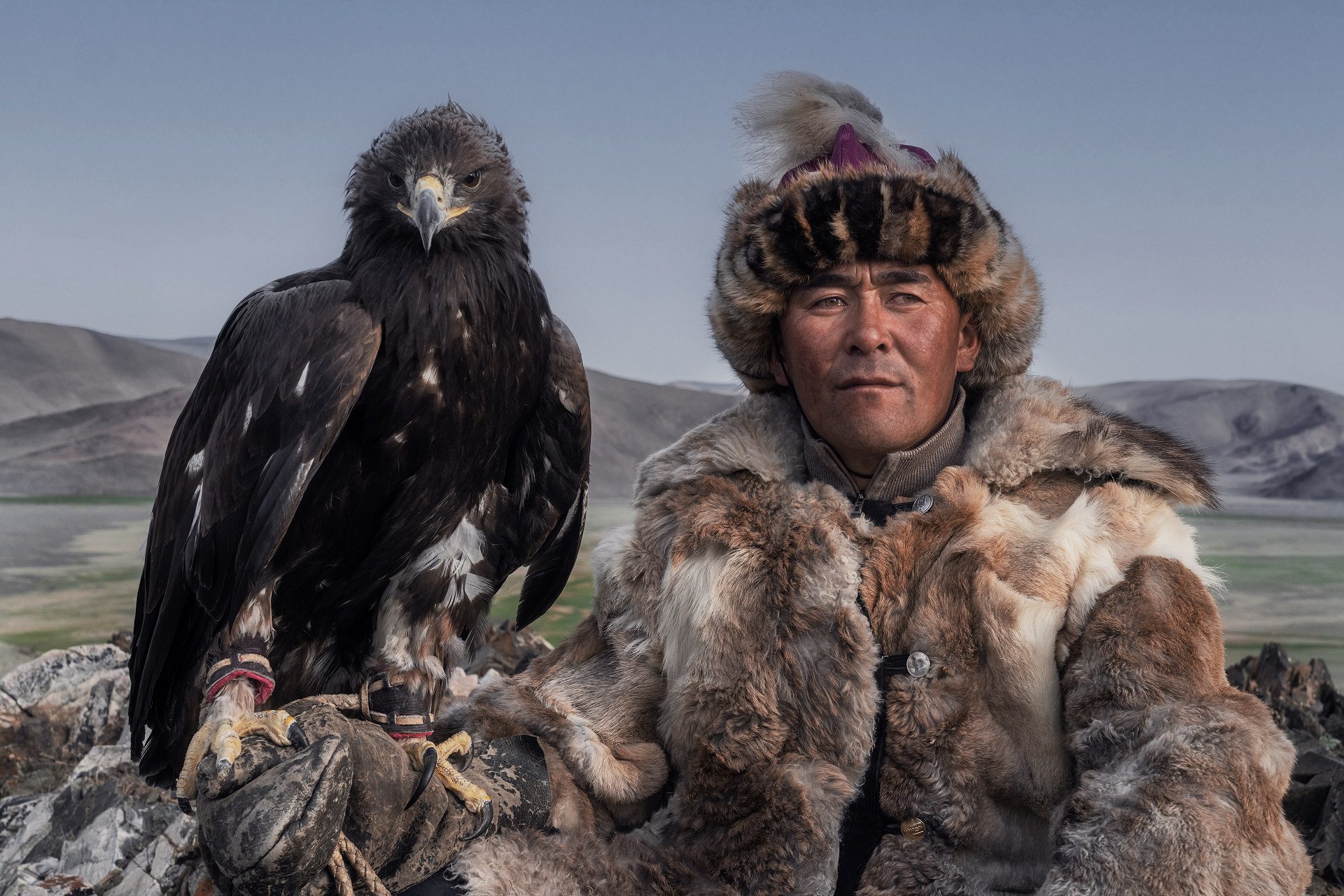 Shaimurat owns 6 gold eagles in the past 21 years: 4 in the past, and 2 in present time. They are 3 and 5 years old. He kept them for 10 to 15 years. He has been taking care of the eagles like his own kids, as he said, he always talks with them. He hunts about 15 foxes per year in the winter, and use the fur to make hat or sell it. He also hunts marmot in the winter and rabbit in the summer. He hunted 3 wolves in the past. He said it is not easy to hunt wolves because of the size, usually it is the effort of at least 2 to 3 eagles! 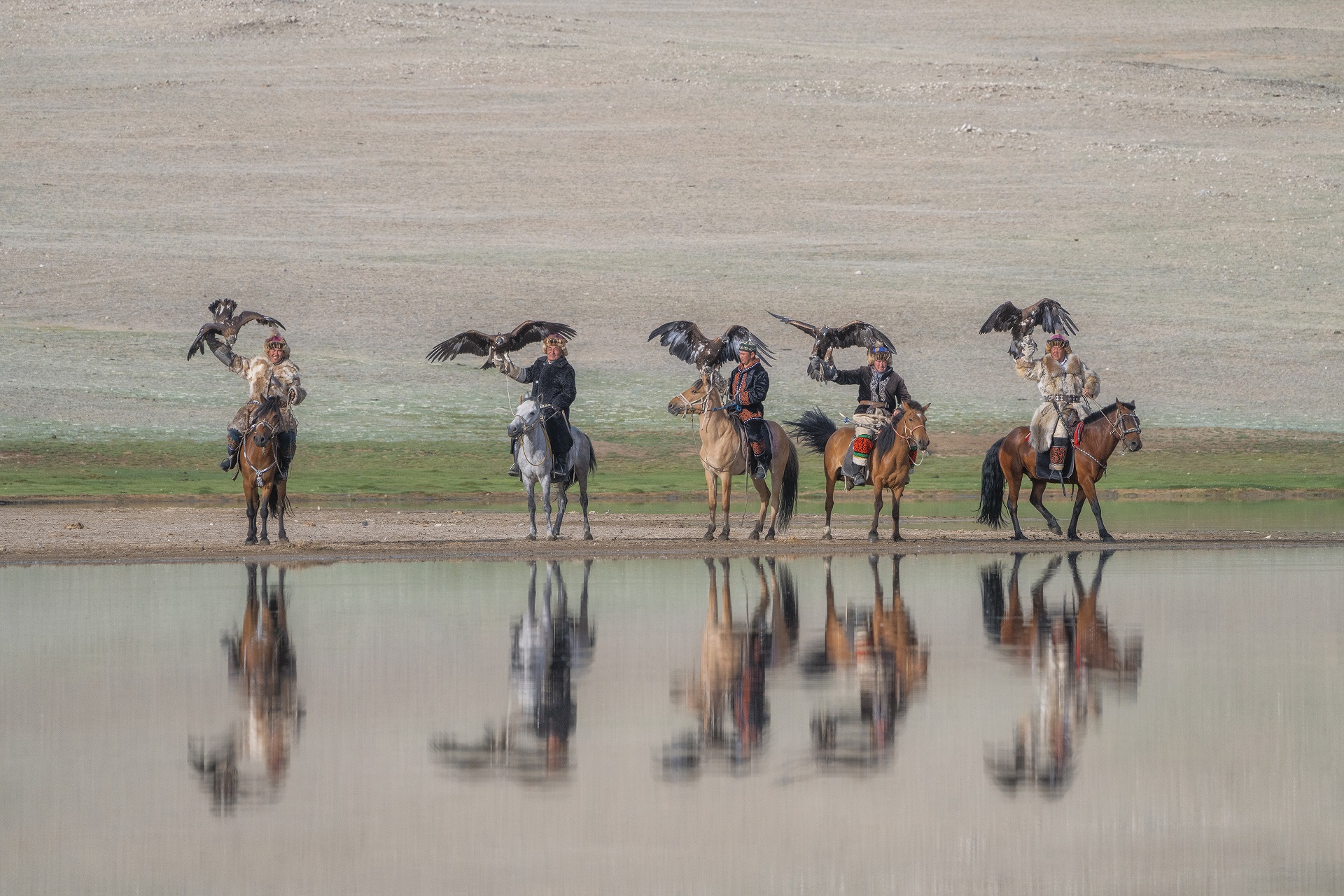 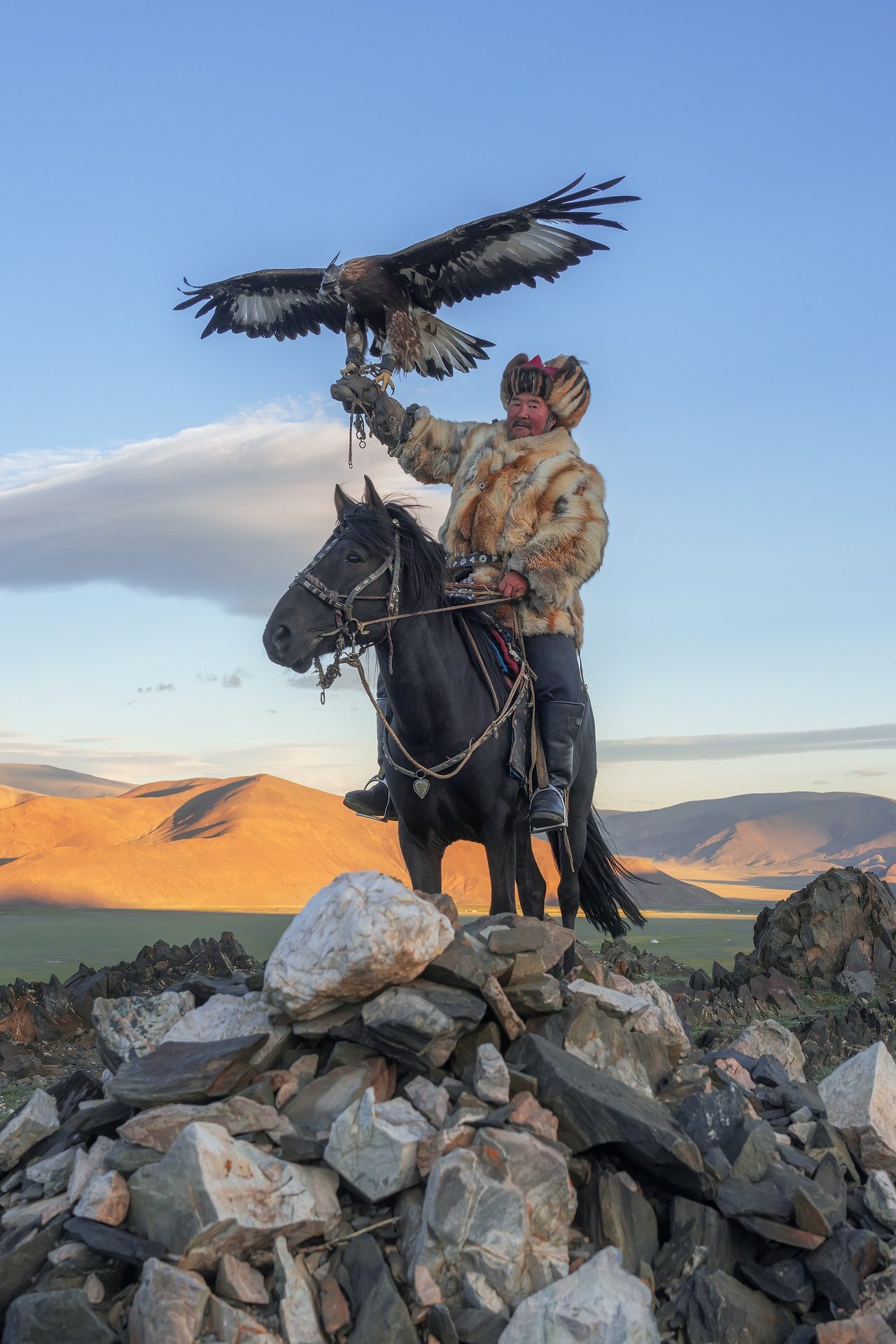 Eagles are sensitive to sounds, sudden movements and changes in light, therefore they are blindfolded by hoods, also known as blinder, to make them feel safe and calm. The hoods were removed during feeding and hunting. Without the hood, the eagle might get excited and take off before the hunter is ready. 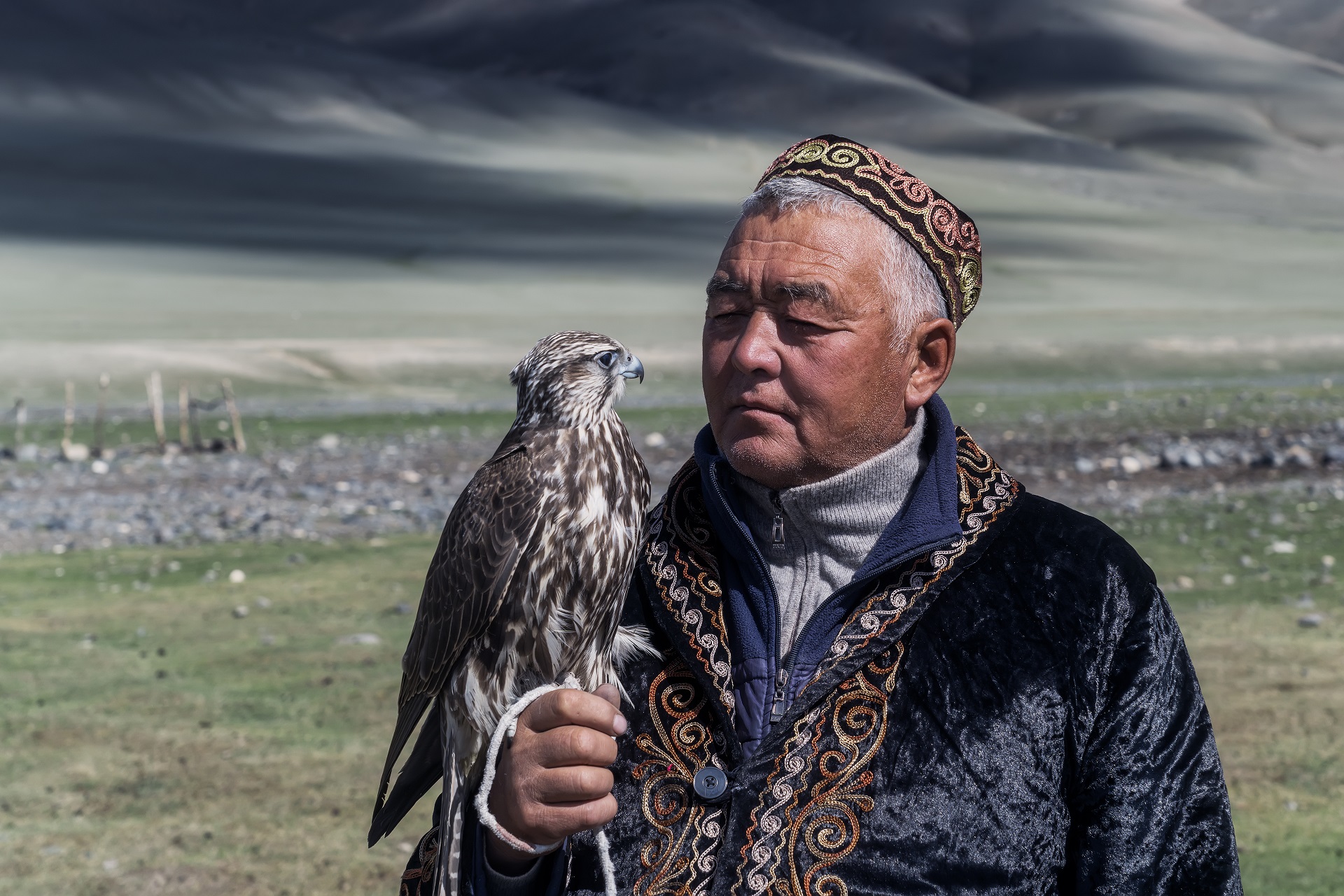 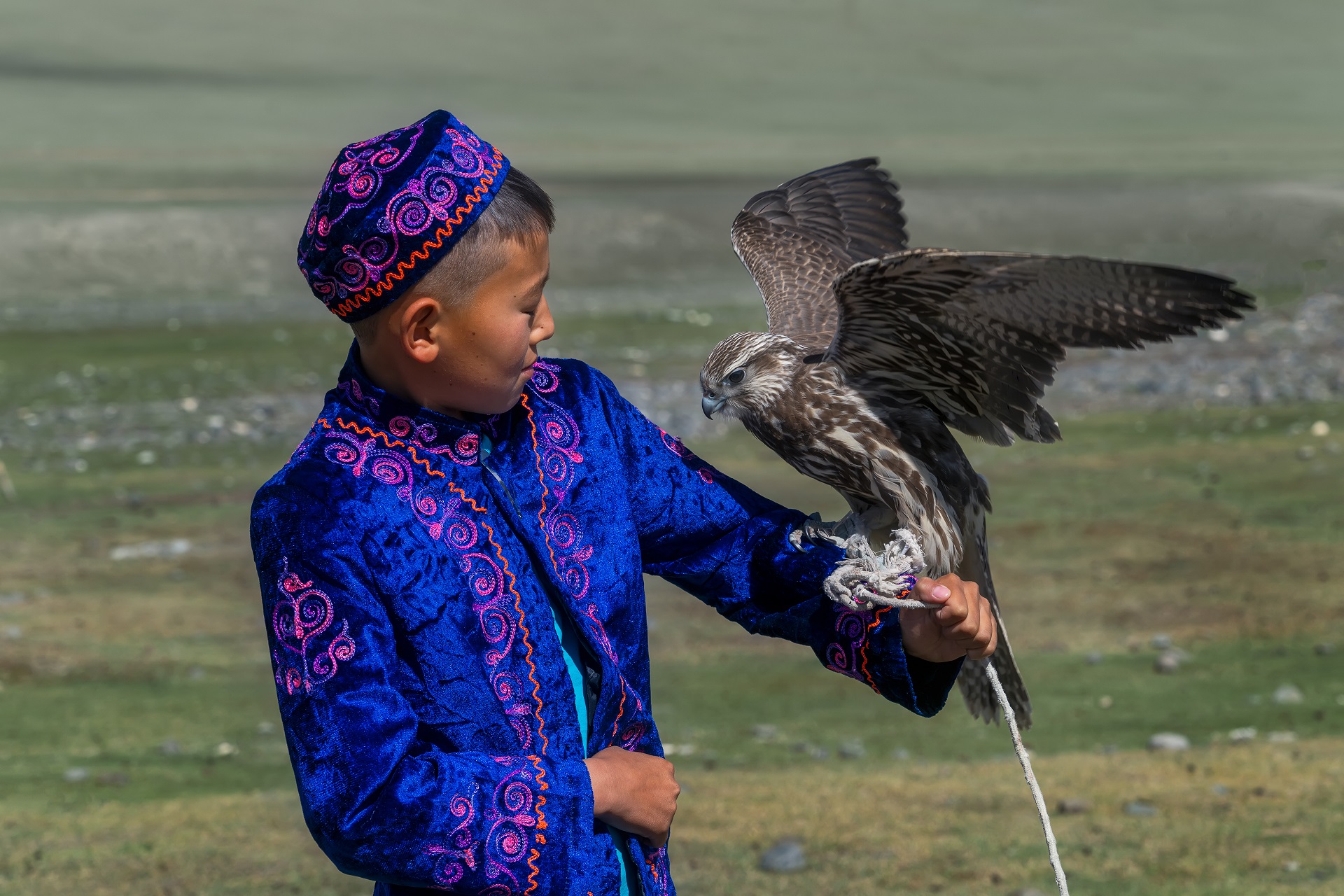 The hunting with eagles is primarily for fur, not for meat. This fur is an integral part of traditional Kazakh clothing. Various animals are hunted for their fur, including rabbits, hares, marmots, red and Corsac foxes, wild cats and wolves. Traditionally, eagle hunters wear black coats or wolf fur coats, boots, and fox fur hats called “loovuuz”. According to Shaimurat, his traditional wolf fur coat was made of 5 wolves, and 3 of them were hunted with his golden eagle. 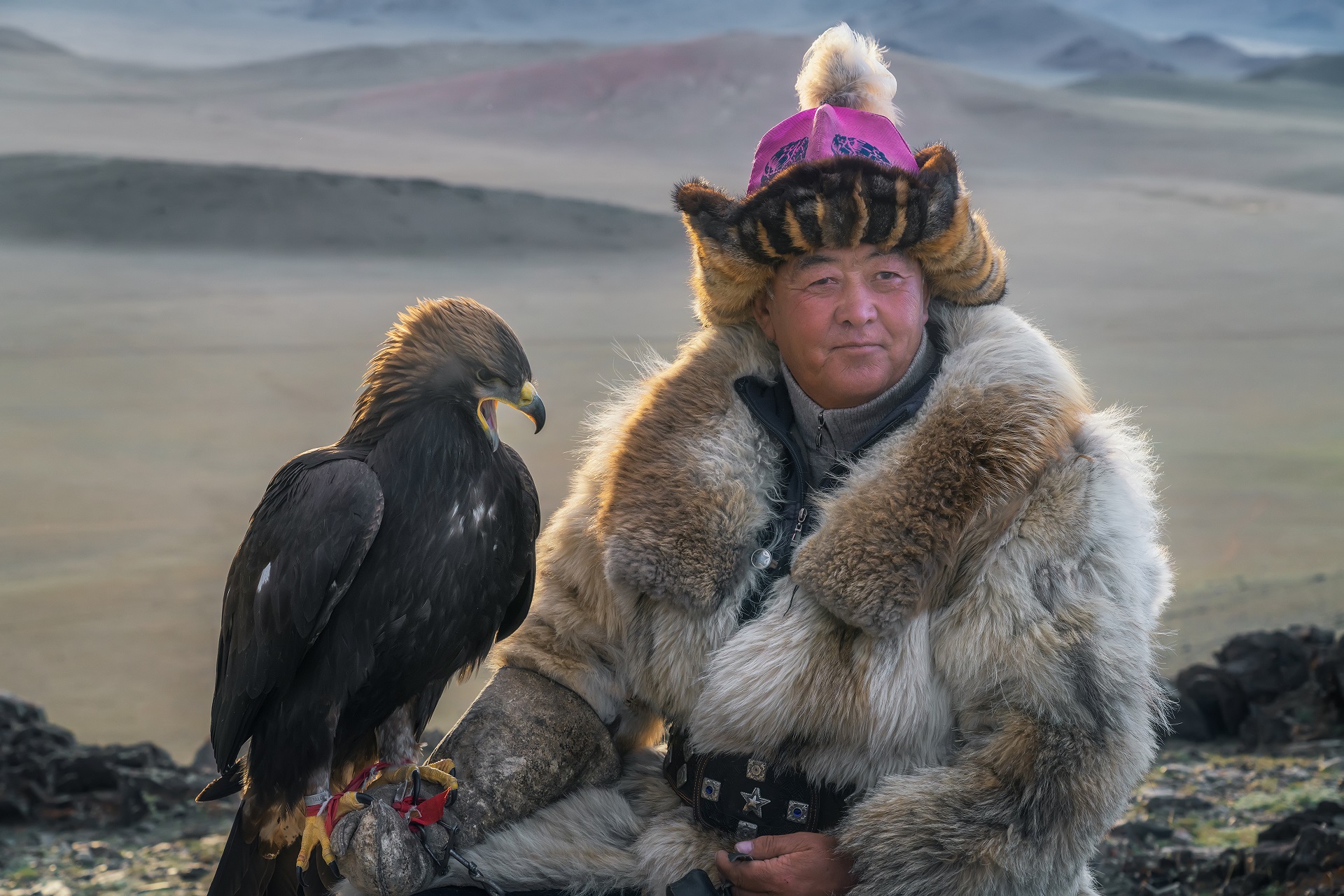 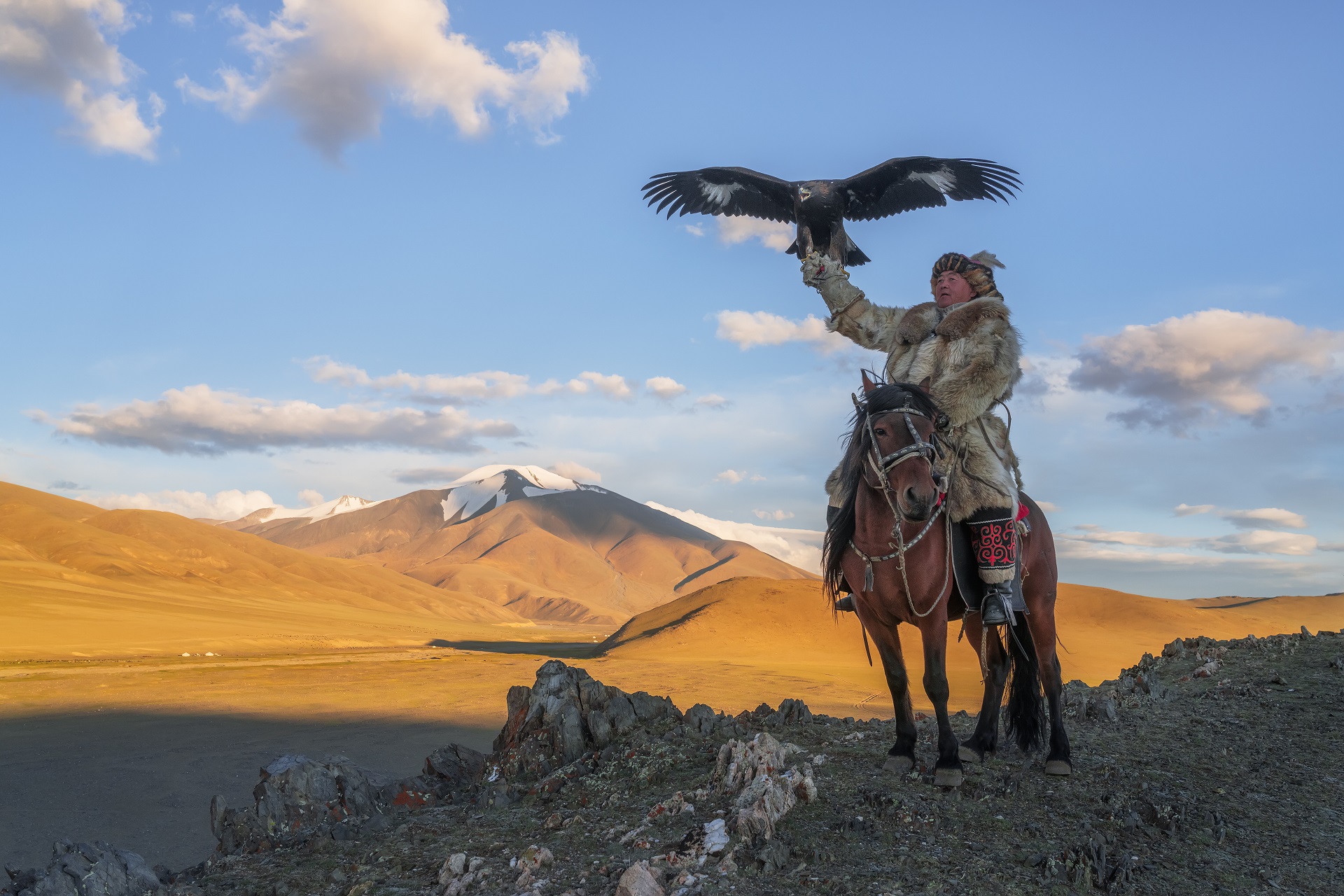 Shaimurat is one of the most skillful and experienced “Berkutchi” or competitive eagle hunters, and he won multiple awards throughout his life. He won multiple gold medals in the eagle hunter festival in various places: 4 in Bayan-Ulgii, 2 in Ulanbaatar, and 1 in Khos-Agash, Russia. He also won many medals in horse racing. The horses also play a central role in the daily life of Kazakhs, and it is traditionally said that “a Kazakh without a horse is like a bird without wings”. 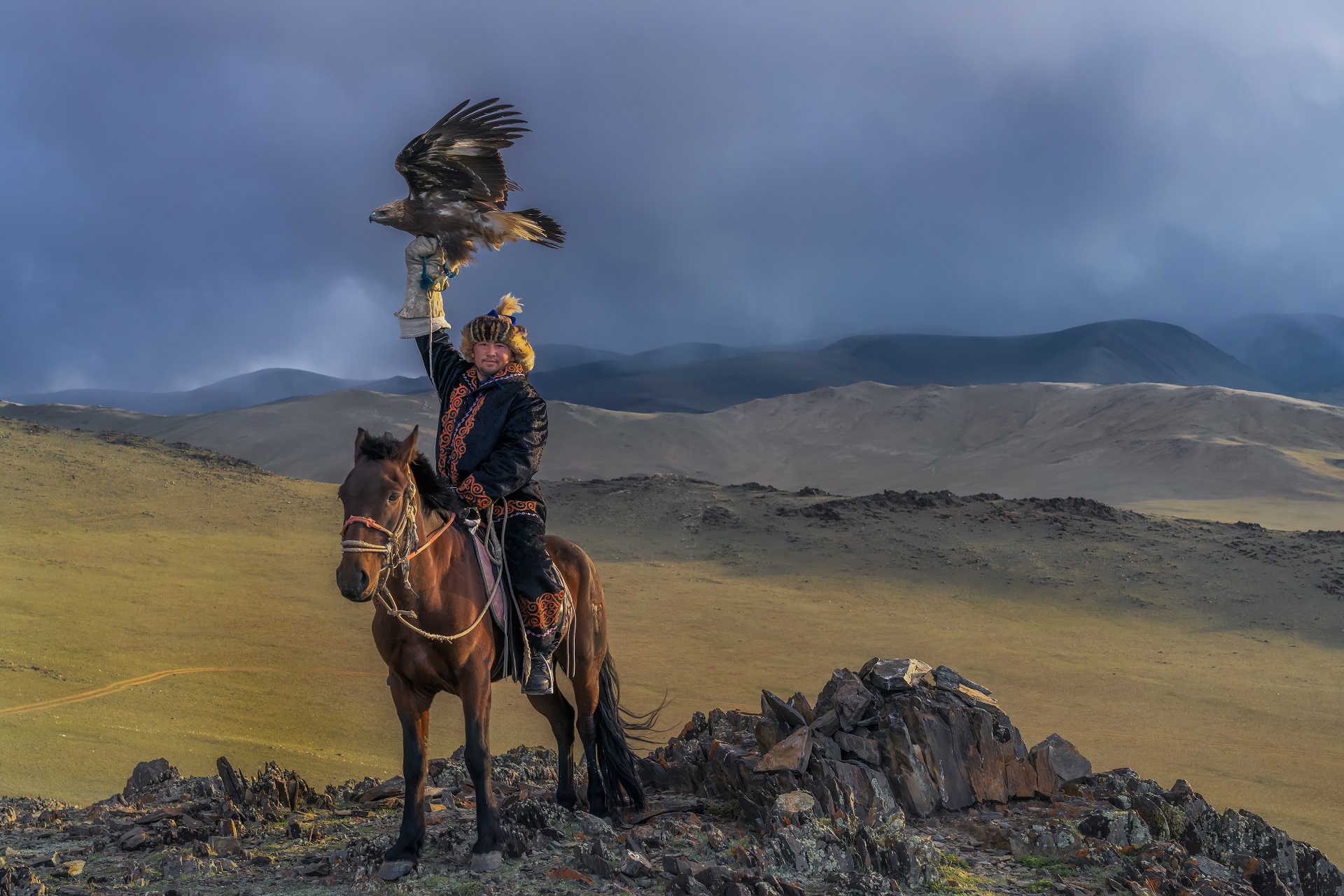 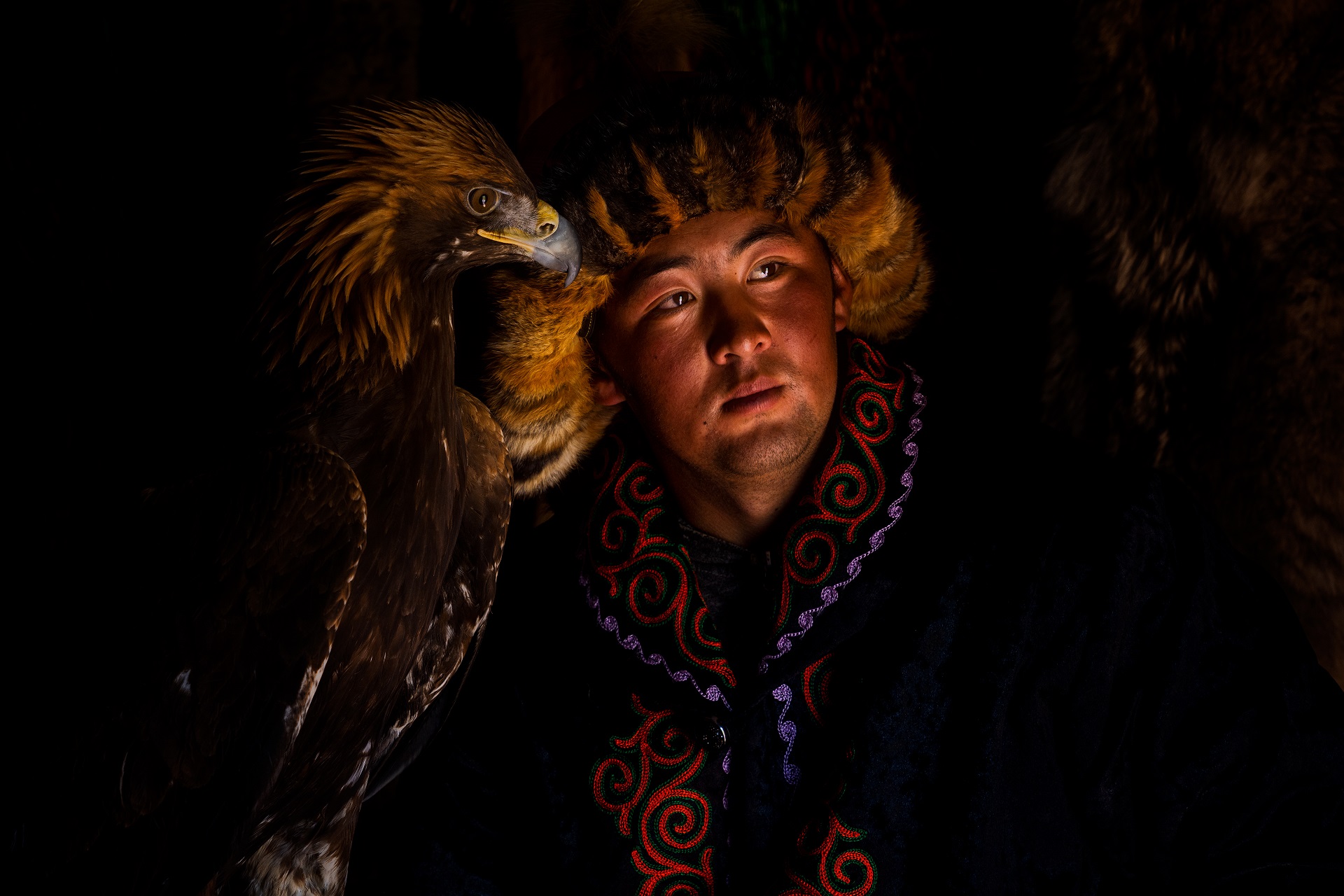 Serikjan Shaimurat (Seka), 21 years old, the youngest son of Shaimurat. He graduated from high school and decided to be the herder. He has been practicing eagle hunting since he was 13 years old. He has two eagles in the past decade. The first eagle was captured by his father and later releases. The second eagle was obtained from his relative, and she is 3 years old now. Seka hunted about 13 foxes and 7 rabbits. Seka has been participating golden eagle festival since 2015. According to Seka, he loves to train eagle and he wants to be a champion eagle hunter like his father. 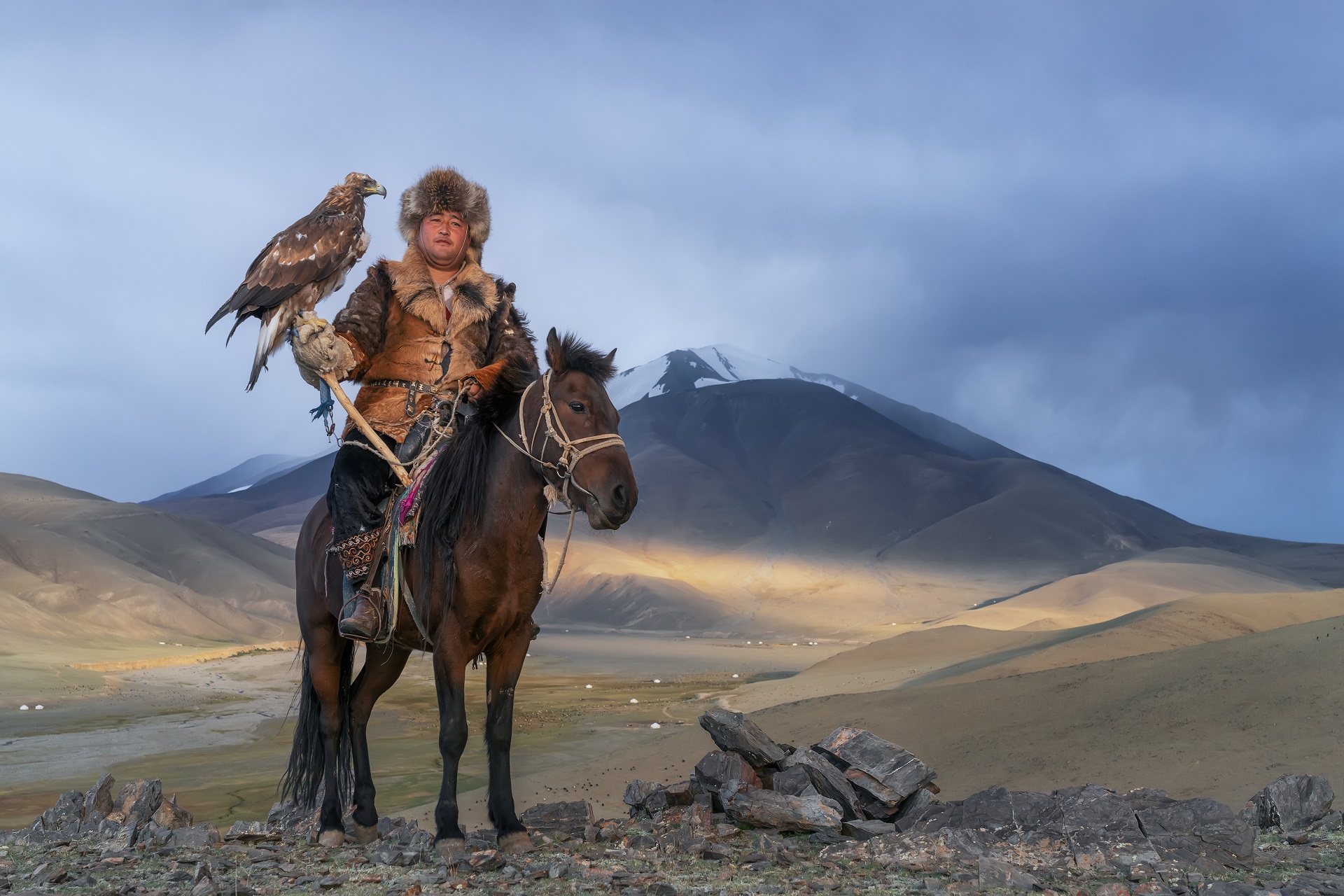 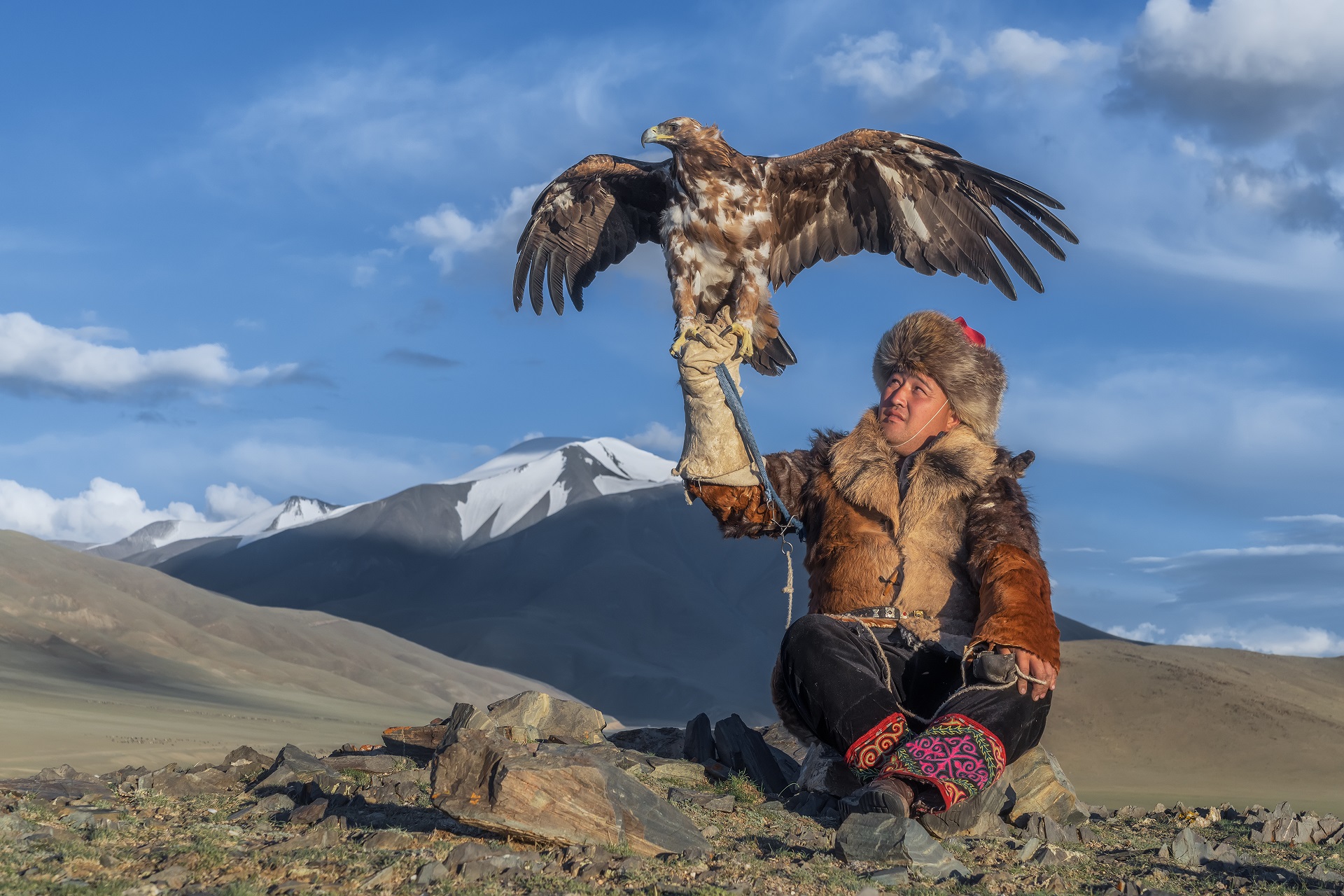 Daulet Amantai (Daklay), 31 years old, father of two daughters (3 and 2 years old), and son-in-law of Shaimurat. Daklay has been apprenticed by Shaimurat for 3 years. He has an eagle of 5 years old. He works as an accountant in Altantsugts. During the summer break, he stays in the Ger camp with Shaimurat family and help Shaimurat to entertain tourists. According to Daklay, he enjoys being an eagle hunter, and he would like to compete in the golden eagle festival next year. 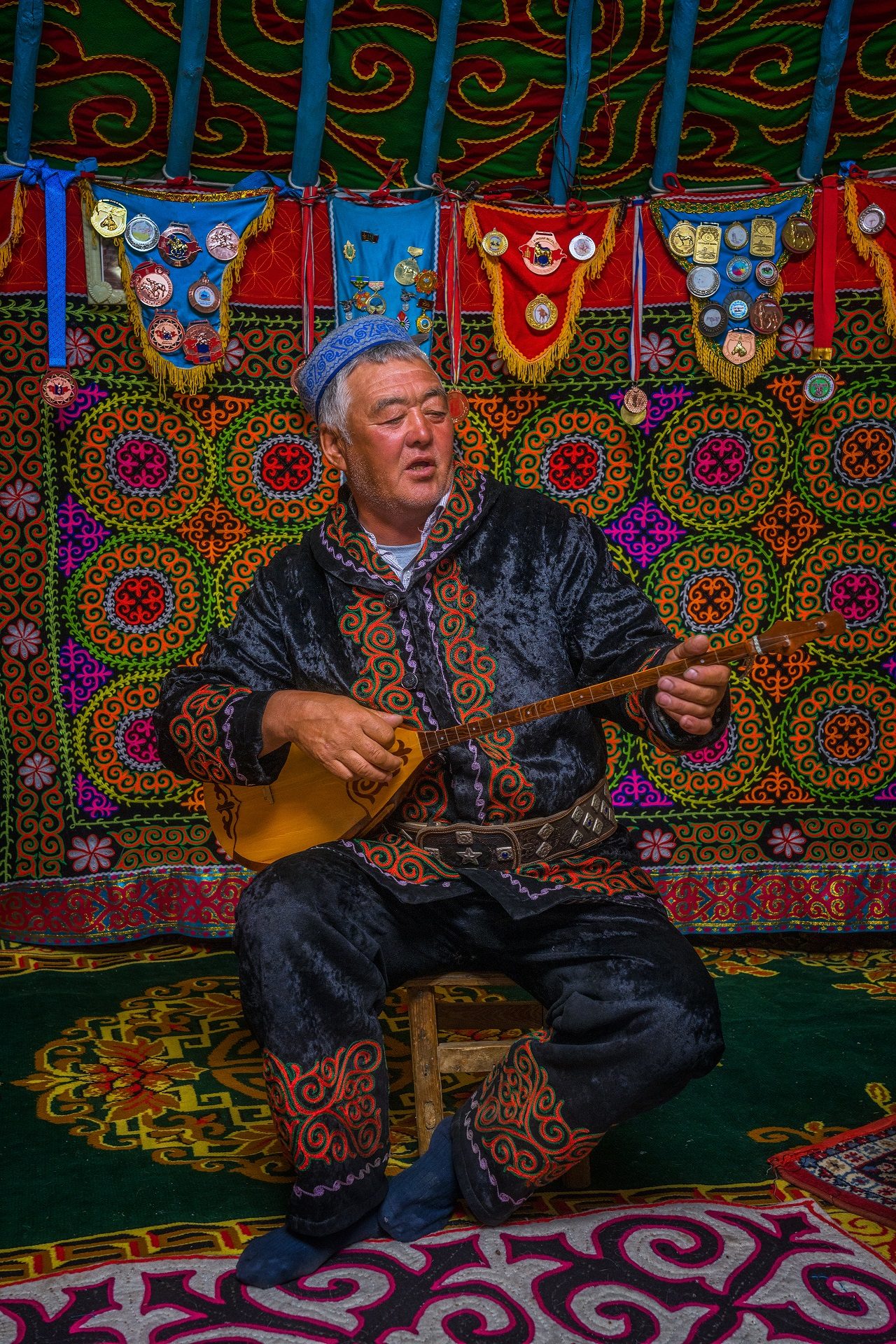 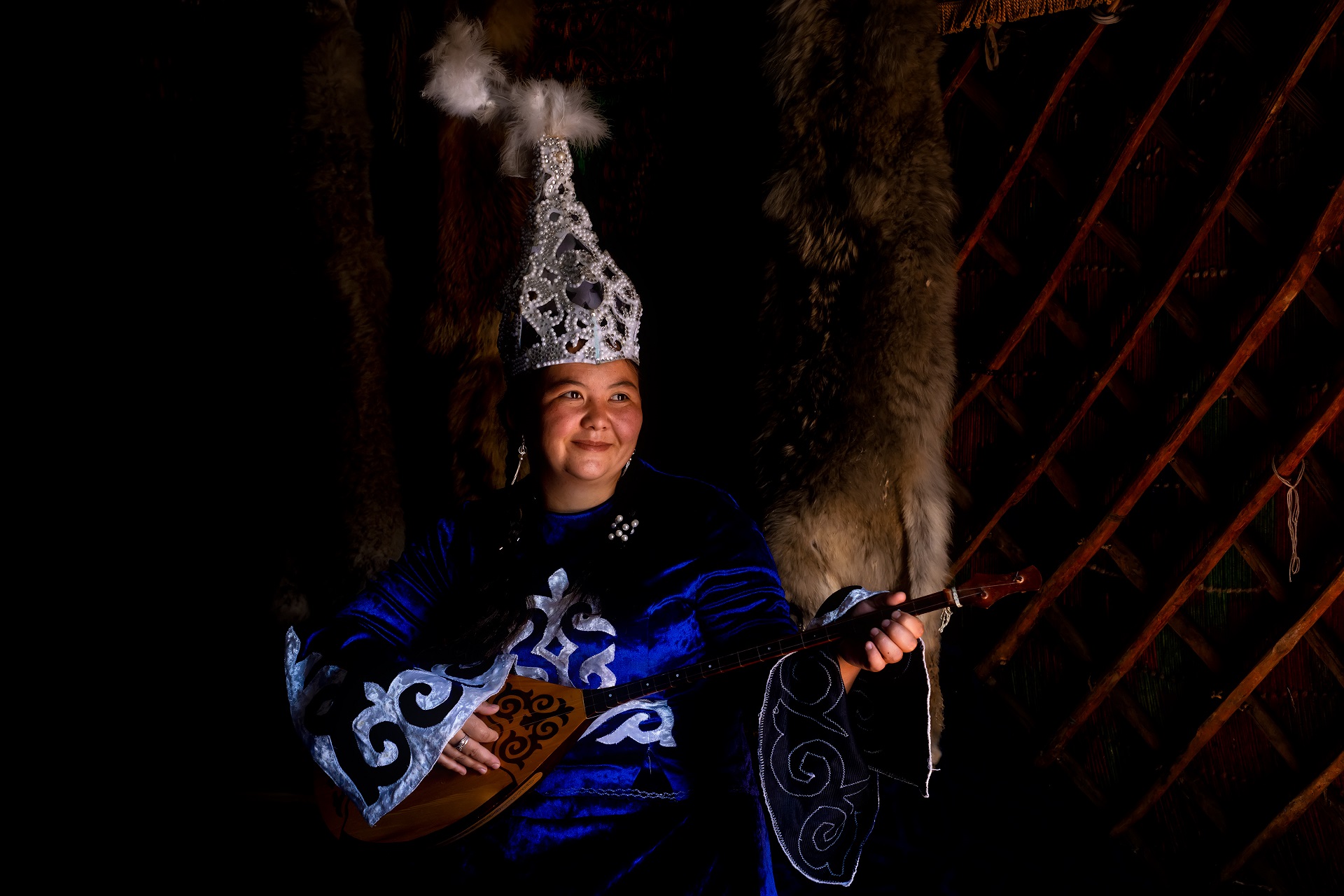 Other than eagle hunting and horse racing, Shaimurat is a skillful dombra player, which he inherited from his father since he was 8 years old. We enjoyed the incredible private dombra “concert” by Shaimurat. This beautiful music has been replayed in my mind for days – perhaps my desire of spiritual freedom rather than materialism, just like a Kazakh! Although we have to communicate with each other via our local guide/translator, Shaimurat’s hospitality is second to none. Shaimurat, his family members and his friends are the friendliest and nicest peoples I’ve ever met! 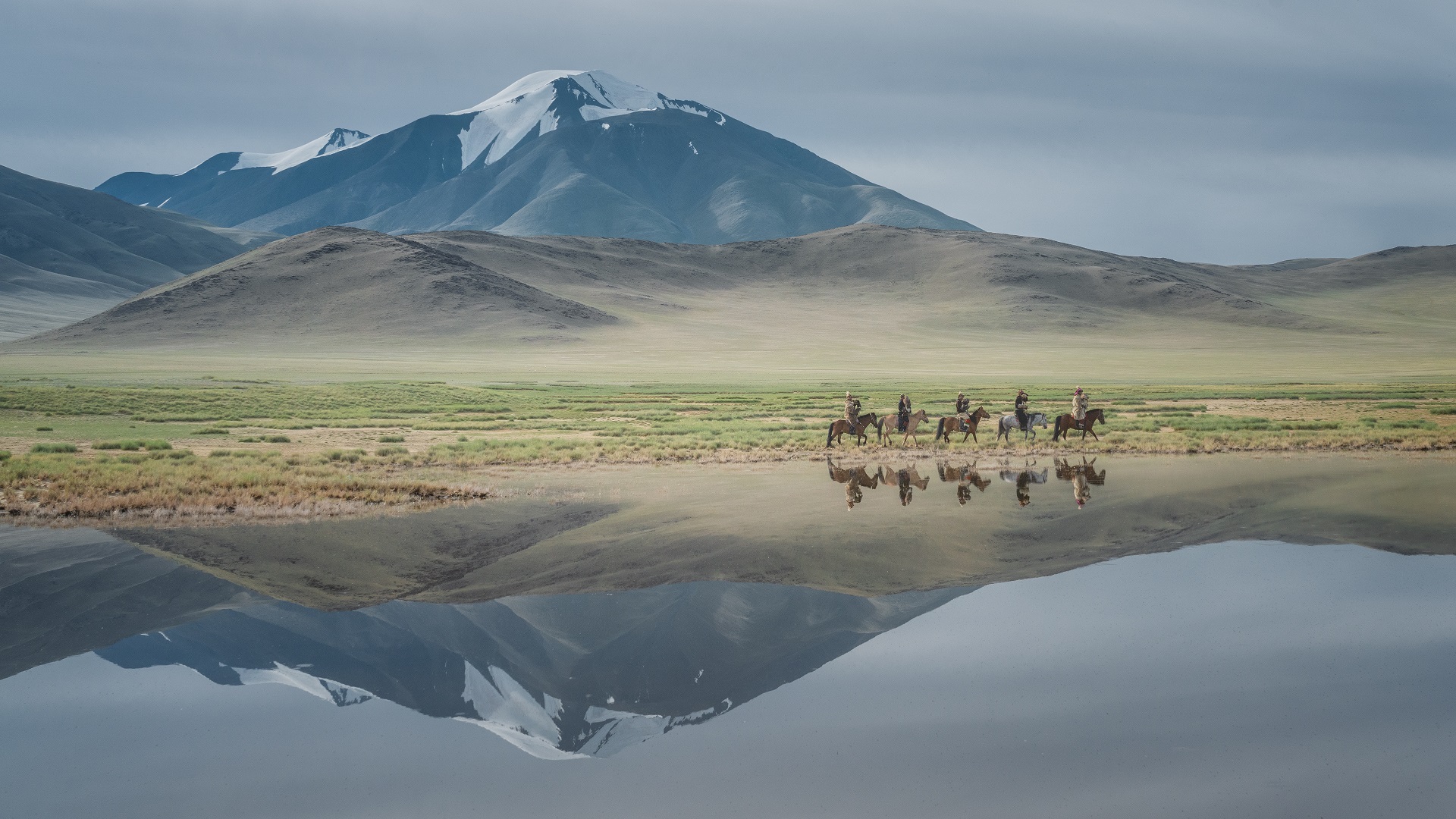 Every mid-October since 2000, Golden Eagle Festival has been a major tourism attraction in Western Mongolia. This event aims to promote their unique heritage to their next generation and to the world. In 2011, UNESCO added Kazakh eagle hunting to the List of the Intangible Cultural Heritage of Humanity, as an example of living human heritage. As an eagle hunter told National Geographic, “When Kazakhs came into the world, they were eagle hunters.”

Join us for the next adventure to Mongolia. For more information, please visit: https://kahwailin.com/mongolia-2023a/